My bike is stolen! 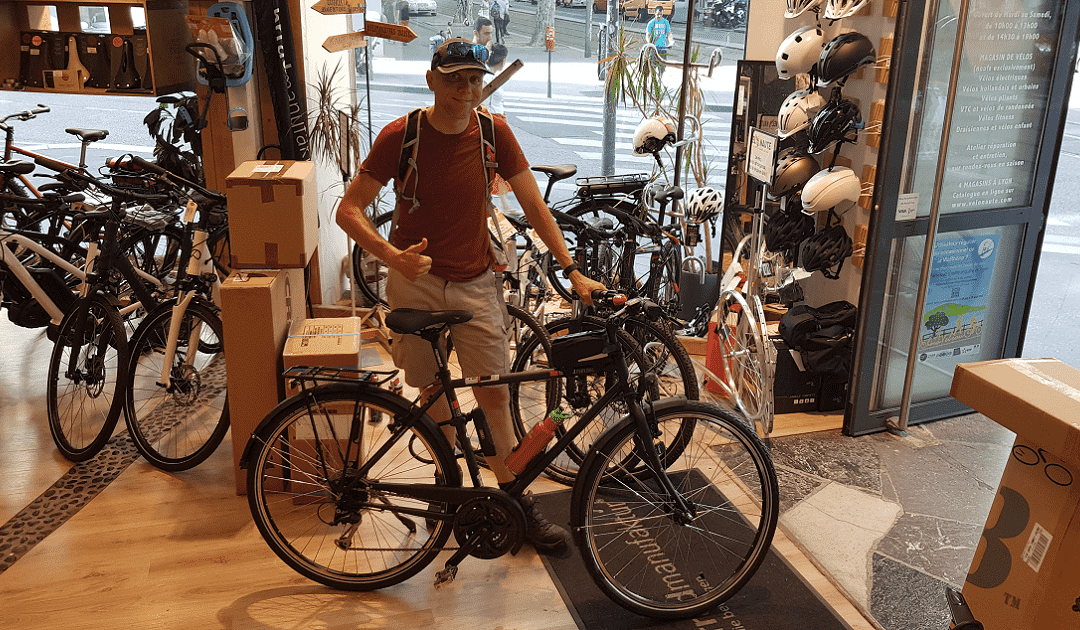 After a few days at Susi in Switzerland, I continued my bike ride on July 30. I was now approaching the most dreaded part of my trip: the Central Massif in France. During a distance of 233 km I would bike just over 3500 height meters. Google maps continued to show me challenging roads and I had no idea what the terrain and ground would be like and I had thoughts in mind that I might not be able to ride over the top of the mountain with my bike trailer.

My bike is gone!

On August 1, in La Grand-Croix between Lyon and Saint-Étienne, the thing that wasn’t supposed to happen happened. While I was taking a break at McDonald’s, my bike was stolen. I was quite shocked and I remember that I hardly got angry before my brain started working on possible solutions. After the police arrived and I submitted my report they drove me to a hotel where I spent two nights.

An hour after the bike was stolen, my friend Petra in Bremen had set up a crowdfunding campaign. For 24 hours, friends I know and people I never met contributed with almost 1000 Euros. When we closed the campaign a week later, I had collected just over 1200 Euro. The support I received during this time was extremely important and I got new energy to continue my trip. I’m so tremendously grateful for the willingness of people to give out of a desire of being in service. Even if the source wasn’t a joyful moment, it certainly was one of the most memorable events during my trip.

The next day I got help from a couple from the hotel. Although their car was broken and in need of immediate service, they drove me to the police station so I could make a police report. The main challenge after the bike was stolen was now to find a bracket between the bike trailer and the bike. According to a website, there would be parts in a bike shop in Saint-Étienne. From the police station I walked (and got a short lift) the distance to the bike shop. They had no parts, however, but the bike dealer could speak English and promised to help me when I called around and asked other bike shops. In the end, I got a hold of a bike repairman who had the right part in Lyon.

I got on the train, found the bracket and went to the closest bike shop and bought the first best bike I could find. It took a couple of hours to bike back to the hotel and after a last night at the hotel I was on the road again, heading south.

When I think about this event now, almost six months afterwards, I am a little fascinated. After the initial shock that lasted a few minutes, I became very goal oriented. I can’t remember spending many seconds feeling sorry for myself, but instead I did what needed to be done. I think there were mainly three ingredients that helped me in this: